Make these homemade Halloween donuts this year on Halloween; they are super easy and delicious!

October is just around the corner, and what is the most exciting part of that month? Halloween! Dress-up time, trick or treat, spooky movies, Halloween desserts; all these within a month!

What is the best way to celebrate Halloween if not with your budget-friendly and easy-to-make Halloween Donuts?

These donuts are a simple but delectable Halloween delicacy. It is sweet, and the texture is soft and rich that each bite from a piece would definitely give anyone the satisfying yum of the donut. Do you want to know what is even better about these donuts? Well, they are glazed with chocolates! If that does not sound mouthwatering, I don't know what is.

These donuts are best served when you have a Halloween party at home, where your friends and family are gathered for some traditional dress-up party. Halloween Donuts are suited for this kind of event since you can carry them around while you go and mingle with others.

They're a fantastic alternative to traditional desserts such as cupcakes, brownies, cakes, and macarons. Refrigeration is not required and they can be prepared ahead of time as well as transported with relative ease.

The Origin of Donuts/ doughnuts

An American treat made of leavened fried dough, doughnuts are popular in the United States. There are many different ways to prepare this sweet snack, which can be made at home or purchased from bakeries or supermarkets and malls.

It is popular in many countries, and it can be found in many different forms. The conventional spelling of the word is 'doughnut,' whereas the simplified spelling is 'donut.' In most cases, doughnuts are deeply fried and made from a flour dough, however other types of batters can also be employed.

The toppings and flavorings used on different varieties of pies vary, including sugar, chocolate, and maple glaze. Doughnuts may also contain other ingredients such as water, leavening, eggs, milk, sugar, oil, shortening, and flavors, both natural and synthetic.

The earliest known origins of modern doughnuts can be traced back to the olykoek Dutch settlers who carried doughnuts with them to early New York in the 17th century. These doughnuts were very similar to later ones, but they did not yet have the ring shape that they have today. Eventually, the recipe for doughnuts evolved as years pass by, and now the common shapes of doughnuts we see in bakeries are rings; circular with another circular hole in the middle.

Why Does This Halloween Donuts Recipe Works?

Donuts are made in different ways. Its preparation and way of baking depend on how you want to do it. However, this particular recipe is the best one to follow when making these treat because:

What's in This Halloween Donuts Recipe?

Plain Flour. If you use plain flour, it will give the dough a little more flexibility, allowing it to trap more air pockets and produce the lightest, fluffiest donuts possible.

Greek Yogurt. The Greek yogurt will give the batter the texture that will moisten the donut and prevent it from being too dry.

Granulated Sugar. Aside from providing sweetness, granulated sugar helps to make donut dough browner and crisper by collecting moisture from the dough when baking.

Milk. A hint of more sweetness and a creamier texture is added to your recipe by using milk to improve their flavor.

Baking Powder & Baking Soda. As you prepare this dessert, be sure to use the appropriate amount of baking powder to enhance the volume and lighten the texture. Baking soda can also be used as a chemical leavener in your donuts if you so want. It combines with an acid to produce carbon dioxide, which is responsible for the rising of the batter.

Salt. In this recipe, the primary function of salt is to enhance the flavor of the other components by neutralizing their flavors. As the flavors of the other ingredients combine, the salt's presence enhances the depth and complexity of the overall flavor. While salt might help to balance out a donut's sugary sweetness, it should not be noticeable as a salty flavor.

Egg. Our donuts are made better by the addition of eggs, which provide structure, leavening, color, and flavor. The texture of this recipe is influenced by the proportions of eggs and flour used in the preparation.

Coconut Oil. Use melted coconut oil for a softer texture of the donuts.

Dark Chocolate. For the glaze of these donuts, you will have to melt some dark chocolates. The taste of the donuts will be more improved once you dip some of them into your melted dark chocolates.

White Chocolate. Not everyone is fond of dark chocolates, so you may use melted white chocolate for some of the donuts as their glaze.
Also, used in making a spider web decoration on the donuts.

How to Make the Best Homemade Halloween Donuts?

If you are to serve these Halloween Donuts at a Halloween Party, you may serve them with cold lemon juice. However, if you just wish to have them on a casual cold November day, then you may have them with hot coffee.

How to store Halloween Donuts?

You don't have to freeze Halloween Donuts, just place them inside an airtight container and refrigerate them. They will last for 3-4 days in the fridge.

Can I Make Halloween Donuts Ahead of Time?

You may start mixing your ingredients and make the batter ahead of time, and then freeze the batter until you plan to bake them into donuts. 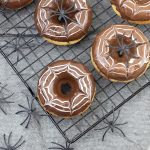 If you like this Halloween donuts recipe and want to save it for later? Add it to your favourite recipe board on Pinterest!