If you are thinking about a dish that will save you so much time during a busy day. Then Easy Cheesy Mexican Spaghetti Recipe is what you are looking for.

Mexican Spaghetti will surely spice your meal up as the traditional spaghetti embraces a new line of ingredients that will alter its taste.

Mexican Spaghetti is saucy with a little bit of spice dish. A little taste from this spaghetti and you will immediately recognize the subtle kick of spice from the different ingredients in this recipe. Not to mention that it is also topped with savory cheese, making it equally cheesy as it is saucy.

Mexican Spaghetti is a perfect go-to food for dinner when everyone in the family was busy the whole day and has no time to prepare an intricate dinner. It is simple yet with a touch of classic meal for a whole family to share. Imagine turning classic spaghetti into this interestingly flavorful dish. Mexican Spaghetti is also a good lunch. The thing about this dish is that it is so simple to make yet when you serve it at the table, everyone will view it as a dish worthy of everyone's attention.

The Origin of Mexican Spaghetti

Mexico's version of spaghetti is known as sopita de fideo, and it is a stock-based noodle soup that is popular in Spanish, Mexican, and some parts of Filipino cuisines. Mexican Spaghetti can be found in many different variations. The meal is thought to have originated in Spain, according to certain theories.

Fideo is a noodle, and it is most commonly used in the plural to refer to vermicelli, which is a type of pasta. It is customary to use thin noodles in the soup, which are commonly smashed or sliced and then cooked separately before being simmered with the other soup ingredients. Spanish cuisine is credited with inventing the sopa de fideo, which is now popular throughout the country. Spaniards introduced the soup to the people of Cavite, Philippines, in the 1600s, and it became popular among the locals. As a comfort food in Cavite, it has been described as such.

Typically, Mexican Spaghetti is cooked as a soup. However, numerous alterations of this recipe and now many households embrace the typical way of preparing and serving spaghetti. Instead of swimming in a bowl of soup, the pasta is now just timidly saucy.

Why Does This Easy Mexican Spaghetti Recipe Works?

There are so many types and recipes of spaghetti out there. You will never run out of options. However, out of all the hundreds of ways to make a plate of spaghetti for yourself or your loved ones, Mexican Spaghetti is the most must-try because:

Ground Beef. For your Mexican Spaghetti, the best ground beef to use is ground chuck. This type is fatter than ground sirloin and ground round, and the fat gives the meat its tasty flavor which will enhance the taste of your recipe.

Dried Spaghetti Noodles. Spaghetti noodles are best suited for hearty dishes with sauces like your Mexican Spaghetti since it has a firm structure that will hold up better with other ingredients.

Onion. One of the best flavor enhancers in a recipe is onion, as it brings a subtle sweetness to the other ingredients while equally enhancing their individual taste during the cooking process. Onion is a good ingredient to initially cook your ground beef with.

Tomatoes. Add a classic sweet and tangy taste to your spaghetti. Plus, tomatoes also create a balance between the different flavors in the recipe.

Corn. What a weird choice of additional ingredient, you may say. However, corn is a good part of your Mexican Spaghetti recipe because it imparts sweetness with a soft, buttery flavor.

Tomato Sauce. In any dish that could benefit from a strong flavor, tomato sauce is a must-have. A base ingredient is typically used to thicken, color, and enhance the flavor of other ingredients in your Mexican Spaghetti.

Cheddar Cheese. Cheddar has a sweet, full-cream flavor that is pleasing to the palate. Because of its firm, yet creamy texture, as well as its pleasant, savory flavor, this particular cheese will be used in this recipe.

Taco Seasoning. If you would like the hint of the taste of cumin, chili powder, paprika, garlic, oregano, and salt, you must consider adding Taco Seasoning for your spaghetti. This seasoning adds spice to your dish and that unique sweet and warming spice only makes your spaghetti rich in flavor.

Chili Powder. Some of us really love to spice things up. Hence, the addition of chili powder into the pot along with the rest of the ingredients will give us the satisfaction of that heat and searing spice that only chili powder could give.

How To Make Cheesy Mexican Spaghetti?

Garlic bread or chicken bites will surely serve as a good combo for Mexican Spaghetti.

How to store spaghetti?

Refrigerate any leftover spaghetti for up to three days in a covered container. As soon as you're ready to serve, pop it in the microwave for a minute or two.

Can this spaghetti recipe be vegetarian?

Yes. You just have to omit ground beef altogether. 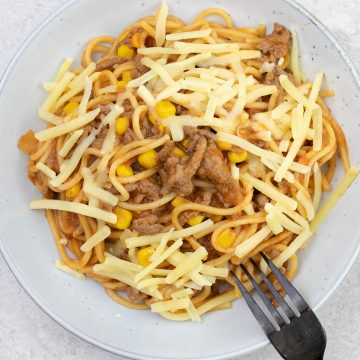