Mutabal, sometimes known as Moutabal, is one of the most well-known easy-to-make Middle Eastern eggplant dishes. Needless to say, Mutabal is a Middle Eastern dip made with eggplant.

This recipe is delightfully creamy with a rich texture perfect for a complimentary dipping dish. Among the key ingredients in this recipe is tahini, which is a slightly bitter, earthy, nutty paste made from sesame seeds. It plays an important role in the dish's texture and flavor. This lends a distinct flavor and texture to the eggplant dip, which distinguishes it from the other dips you may have already encountered and wish to compare it with.

This roasted eggplant dip does not have to be specified as a breakfast, lunch, or dinner dish. You may always have Mutabal any time of the day as a dipping sauce for your crackers, or even pita bread; any food at all you would like to have something to dip with. Although most people serve it as an appetizer before a full meal.

Mutabal's flavor is highlighted by a pretty much diverse set of ingredients. Cummin powder, tahini, eggplant, and lime juice mixed with a full-fat yogurt seemed strange to some but a dip from the mixture and anyone would truly love how it tastes like. Follow this recipe for more tips and step-by-step steps on how to make the perfect roasted eggplant dip!

Mutabal is a famous meal made of mashed eggplant that is blended with a variety of sauces and spices. Mutabal is made up of mashed cooked eggplant and tahini, which are combined with seasonings like salt, pepper, olive oil, and anar seeds to create a delicious dish. Frequently, the eggplant is cooked or broiled over an open flame before peeling, resulting in a pulp that is soft and flavored with smokey flavoring. Mutabal is typically served as a dip with pita bread, although it can also be incorporated into other recipes.

Mutabal and baba ganoush are both dips that are created from roasted eggplants. In truth, they both contain garlic, lemon, and salt, among other ingredients.

The difference can be traced back to a certain element. Tahini, which is a slightly bitter, earthy, nutty paste derived from sesame seeds, is used in the preparation of Mutabal in small amount. The second difference is that baba ganoush is frequently served with vegetables such as onions and tomatoes, while Mutabal is mostly served as a dip, although the Lebanese version may occasionally be served alongside pomegranate seeds and walnuts. Also, Mutabal recipe uses yogurt and tahini, unlike baba ganoush recipe, which uses only tahini.

Why Does This Mutabal Recipe Works

Mutabal is a famous dish, as have been mentioned above, so it is only befitting that the internet is full of its recipes with varied ways on how to make it. This recipe, however, is the one you shall try to do at home because:

What's in This Mutabal Recipe?

Eggplants. Eggplants have a somewhat mild and slightly bitter taste with a spongy and soft texture when cooked. Choose the fresher-looking eggplants in the market for a better taste and texture of your Mutabal.

Tahini. It may have a texture and appearance similar to peanut butter, but it does not taste like it. Tahini is not sweet in the same way that most nut butter is, and the nutty flavor of Tahini is robust and earthy, with a hint of bitterness.

Garlic. Garlic has a flavor that can be described as spicy in some ways, though not in the same manner as chili peppers or peppercorns. It's more that it generates such a warm sensation that it comes across as spicy to the taste buds. A certain earthiness can be detected in the flavor, which will work well with the other ingredients in the recipe.

Yogurt. Choose a full-fat yogurt for the recipe, since it has a richer texture that will help make the dish more creamy.

Lime Juice. Add a more interesting taste to your Mutabal by adding just the right amount of lime juice to the yogurt mixture.

Cumin Powder. The taste of Mutabal is improved by the addition of cumin powder, which imparts a warm, earthy flavor and scent with a hint of sweetness and bitterness.

Salt. Adding salt intensifies aromas and balance other flavors within the recipe.

Pomegranate Seeds. Pomegranate seeds have a flavor that is similar to that of cranberries: they are tart with a hint of sweetness underneath that is why they will go well as a garnish for the Mutabal.

Olive Oil. Drizzle your Mutabal with olive oil before serving.

Parsley. Add some green to your Mutabal serving by garnishing it with parsley as well.

Dip your pita bread into this delicious Mutabal. You can also serve it with tortilla chips or some chopped vegetables.

Place Mutabal in an airtight container and refrigerate it for only 1 to 3 days.

No. However, the only non-vegetarian ingredient in this recipe is full-fat yogurt which you may try to substitute with another vegetarian type of yogurts available. 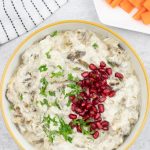 If you like this Mutabal recipe and want to save it for later? Add it to your favourite recipe board on Pinterest!