When we think about mousse, the first thing that comes into our mind is the sweet and fluffy texture of a food that usually comes during dessert. Eggless Chocolate Mousse is one of the many variations that mousses have to offer.

The recipe of Eggless Chocolate Mousse enables the mixing of the flavor of dark chocolate, vanilla extract, and instant coffee until they form an almost new flavor that does not compromise the fluffy yet heavy texture of the mousse.

Eggless Chocolate Mousse aims to provide the sweet and savory taste that mousses commonly offer. However, the only difference between this recipe is the absence of eggs from the ingredients. People are way too used to preparing chocolate mousse with eggs, but this time around, there is an introduction of a unique way of whipping this recipe.

The Beginning of It All

Chocolate mousse is an actual recipe that originated in France. In 2003, The Culinary Institute of America recognized Henri Toulouse-Lautrec as the inventor of the said recipe in the late 19th century. What is fascinating About his mousse creation is that it is different from what he usually made as a post-Impressionist painter in France.

Yet, he did not just wake up one day and decided to whip some cream and melt some chocolate to form a mousse delicacy. He is, as a side-interest, a cook. Aside from the fancy cuisines that he served as a chef, he was also interested in experimenting.

Reason Why This Recipe Works

One can make chocolate mousse in so many ways. The internet has a lot to offer when it comes to preparing a chocolate mousse. In fact, a person can even make a mousse with a different flavor other than chocolate. Vanilla, mocha, and other flavors are available to be served. However, Eggless Chocolate Mousse holds greater satisfaction for the following reasons:

What's in This Recipe

How to Make Eggless Chocolate Mousse?

The Eggless Chocolate Mousse is airy and fluffy. Hence, it is best to serve it along with something solid such as cookies. The semi-hard texture of a cookie will go well with the airy and soft texture of the mousse. You can also add up a caramel bar or brownie for a sweeter treat.

Does any chocolate work well with the recipe?

No. It is best to use chocolate that has cocoa butter as the fat instead of vegetable oil. You can check this on the ingredient label of the chocolate. Chocolates with too much oil will fail to produce a fluffy and soft mixture needed for the mousse.

How can I melt my dark chocolate if I have no microwave oven?

The perfect method for melting chocolate if you don't have a microwave is a water bath method, to do so: 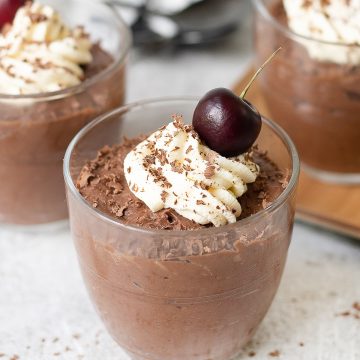 Radwa
Eggless chocolate mousse is airy, fluffy and delicious. It is perfect as a summer dessert, especially when served with some berries. This eggless chocolate mousse recipe is made with only 5 ingredients; it is so simple and straightforward.
5 from 12 votes
Print Recipe Pin Recipe
Prep Time 5 mins
Freezing 4 hrs
Course Dessert
Cuisine American
Servings 6 servings
Calories 371 kcal

If you like this eggless chocolate mousse recipe and want to save it for later? Add it to your favourite recipe board on Pinterest!