For all peanut butter lovers, today I made a low-carb Keto peanut butter cheesecake that you won’t be able to resist. This cheesecake has a strong peanut butter flavour that will explode in your mouth. For extra flavour, you can add chocolate sauce or nuts like pecan or almonds.

This easily made keto cheesecake needs a few ingredients to be made.

How to make the keto peanut butter cheesecake step by step: 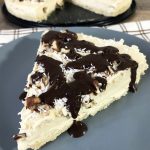 Hello, I am Radwa, a wife and a mother. Also, I am the low carb recipe maker and food photographer behind Healthy Life Trainer. I love making new, simple and quick recipes every day.