'Tis the season for a deliciously prepared creamy Pumpkin Custard Pie With Pecans that you will enjoy throughout the cold holiday season! It gives that white Christmas vibe indeed with its yummy and overly flavorful delight.

It is quick and easy to prepare that in no time you will already be devouring the slightly spiced and mildly sweet luscious Pumpkin Custard Pie filling along with freshly baked pie crust. Don't forget about the texture details of this Pumpkin Pie that are absolute winners! The crust is crisp and firm, but when you bite through a slice, the filling gives you the creamy and smooth texture that you crave from a pie filling.

Pumpkin Custard Pie is a common holiday dish special. Its simplicity yet winner taste have been the favorites of many households to serve during the holiday season when everyone in the family is at home. However, it does not mean that you can only enjoy this pleasant dish on this special holiday occasion. You can absolutely make this at home anytime you would want to!

Pumpkin Pie is a good dessert after a full-meal course dinner. Its mild sweetness is the best thing to taste to end a meal. You can also serve this it as a simple snack for your family to enjoy during a normal afternoon.

The Origin of Pumpkin Custard Pie

In the period between 1620 and 1692, early American immigrants in southern New England's Plymouth Colony may have prepared pumpkin custard pies, albeit without crusts, as a kind of celebration for the harvest. They roasted pumpkins in hot ashes after stewing them or filling a hollowed-out pumpkin shell with milk, honey, and spices before baking them.

Pumpkins and squash were grown by Native American tribes in the northeastern United States. When the early immigrants received pumpkins as gifts, the Native Americans demonstrated how to use the pumpkins in a variety of ways. Approximately 50 years later, the first Thanksgiving dinner in America included pumpkin pie.

Beginning in the 1670s, English cookbooks began to include recipes for "pumpkin custard pie." The pumpkin pie recipes began to sound more familiar as the spices such as cinnamon, nutmeg, and cloves were added to the mixture. Apples, raisins, and currants were frequently included in the filling, according to some recipes.

It was not until 1796 that Amelia Simmons released her first cookbook, American Cookery, by an American Orphan, which was genuinely representative of the American experience. Simmons' pumpkin puddings were cooked in a crust, and they were comparable to the pumpkin custard pies that are popular today.

Why Does This Recipe Works?

Alright, it is already established that Pumpkin Custard Pie tastes divine. But that is not the only reason why you should whip up this recipe at home! Here are some of the things to consider why this pie is a must-try:

Pie Crust. A store-bought pie crust will already work well in this recipe, just make sure to choose a somewhat flaky one since everyone loves flaky and crisp crust!

Pumpkin Puree. This dessert will not be a Pumpkin Pie without the sweet and savory flavor that pumpkin puree provides to the recipe.

Vanilla Extract. A sweetener, vanilla extract adds a floral sweetness that is mild but evident to the taste.

Light Brown Sugar. Light brown sugar helps in thickening the texture of your pumpkin filling. It also adds a rich and sweet flavor to your pie.

Granulated Sugar. Another addition to make this recipe sweet and delightful!

Heavy Cream. It makes your pie rich and creamy both in texture and in taste.

Whole Milk. It helps your heavy cream in thickening and creaming your pumpkin filling so that your pie will achieve the coveted luscious taste it should have.

Eggs. They add structure, flavor, and richness to your custard pie.

Pecans. Garnish your perfect and delicious pie with pecans once baking is done.

How To Make Pumpkin Custard Pie?

If you are going to serve this Pumpkin Custard Pie for dessert, your main course should consist of lemon rosemary chicken or parmesan-crusted chicken breast along with baked potatoes. The delicate taste of Pumpkin Pie will go well with the meaty flavor of the chicken, while the mild taste of the potato is a perfect bonus. White chocolate latte is a good pair for your pumpkin pie if you are to serve it during the evening of the holidays; a perfect comfort food combo.

Do I have to pre-bake the pie crust?

Yes. Most custard pies are better (crispier and flakier) when the crust has been partially baked beforehand.

What milk can I use aside from whole milk?

Some do not like the fact that whole milk contains a lot of fat; hence there are many substitutes for it. You may use skim milk in this recipe in place of the whole milk. Skim milk will still give your pie a creamy flavor and texture, but the whole taste would be slightly toned down than the whole milk. You can also use non-dairy milk such as almond milk or oat milk. 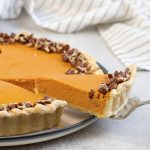