This compote possesses the sweet, juicy, and tangy flavor of mangoes seasoned with granulated sugar and lemon juice. Just imagine the juicy goodness in this recipe! The texture is smooth and almost viscous just perfect as a topping or something to eat with a spoon.

Since Mango Compote is a good pancake topping, it is only natural for this dish to be typically served at breakfast as a pancake and other baked good toppings. It is a great substitute for maple syrup indeed. Give color and more flavor to your usual breakfast dish by adding this compote to your menu, you surely will not regret doing so.

This compote can also be served at snack time as a standalone dish. Devour it in the afternoon, and enjoy its naturally sweet and tangy flavor without the additional taste of any baked goods. Most people treat compote as a dessert as well, hence you may serve it after dinner.

Compote, also known as compôte, is a type of dessert that originated in medieval Europe and is formed of whole or cut-up pieces of fruit in a syrup of sugar and lemon juice. Cubed fruit is simmered in water with sugar and spices for a flavorful dessert. Grated coconut, lemon, cinnamon sticks or powder, cloves, and other spices, crushed almonds, vanilla, candied fruit, or raisins can all be added to the syrup to make it more flavorful and appealing to consumers. Compote can be served warm or chilled, depending on preference.

The compote was created by the medieval concept that cooking fruit in sugar syrup might counteract the effects of humidity on the body. The name is derived from the Latin word compositus, which literally translates as mixing. In late medieval England, it was traditionally offered at the start of the last meal of a feast (or perhaps the second course out of three) and was frequently served with a creamy potage.

The dish was traditionally offered cold at the end of a supper meal during the Renaissance. It became a mainstay of Jewish households throughout Europe since it was simple to prepare, produced from affordable ingredients, and did not contain any dairy products. In modern French, the term refers to a fruit purée that is usually unsweetened and does not contain any fruit bits, such as applesauce.

Today, it is widely available and frequently served in place of vegetables in Northern European countries such as Germany, Holland, and Belgium, as well as in Scandinavia and France, among other places. The word for this in Dutch and Flemish is appelmoes.

Why Does This Mango Compote Recipe Works?

There are so many sweet desserts and syrup substitute recipes you may find on the internet. You will never run out of options of what to try making at home. Yet, this recipe seems like the best choice for you because of the following best reasons:

What's in This Mango Compote Recipe?

Mangoes: You may use fresh or frozen mangoes for this recipe. They will give the compote its main flavor of tanginess and sweetness.

Granulated Sugar: It melts easily; hence it is a good choice of sweetener for your compote. Its natural sweetness will enhance the sweet undertone of mangoes.

Lemon: Squeeze some lemon into the mixture for a more balanced flavor of mangoes. It is indeed a great flavor enhancer.

How To Make Mango Compote?

Crepes, pancakes, waffles, and french toast will surely taste even better with the sweet and zingy flavor of this Mango Compote. Top your yogurt with a spoonful compote for a more distinct flavor too! Your mildly bland-tasting oatmeal will surely be enhanced and brought to the next level once you use this compote as a topping as well.

How to store homemade compote?

You can keep this homemade mango compote refrigerated for up to two weeks in an airtight jar. In addition, it can be frozen for up to two months.

How to freeze homemade compote?

To freeze the compote, make sure it is totally cool before placing it in a clean mason jar with a 1-inch gap at the top, covering it with the lid, and placing it in the freezer for at least one hour.

Is it possible to use a liquid sweetener in making compote?

In this case, using a liquid sweetener such as honey or maple syrup if you want to make a thick sauce is not advisable. If you use these sweeteners, the mixture will be runnier and won't set as much as if you use crystallized sugar. 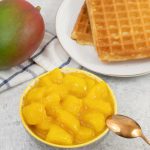